So, um, I missed a week. Sorry about that. Sad face.

We don’t have access to any Apple Watch hardware yet, so it’s difficult to get a good feel for how you will use your app in context. I was given a Pebble for Christmas though, and thought it may be worthwhile getting the core information displayed on a Pebble app so I can experience and analyse the usage flow behind a watch app with this data.

Pebble: the Palm Pilot of Smartwatches

First, my impressions of the pebble:

To me, the product is very reminiscent of the early Palm Pilots - clunky B&W screen, an awkward developer experience, small hobbyist developer community etc. The future’s yet to be written, but the Pebble will need to undergo radical and ruthless improvement to keep pace with the latest smartwatches.

The general concept behind the watch app is a simple display showing the departure times for the closest station. This should provide the ‘in context’ component of the most important watch app functionality. The initial UI design (pictured) includes the nearest station, and the destination, pattern, and minutes remaining for the next four departures from the station.

The simplest way to manage communication between the phone app & the watch app is the AppSync API. The general semantics of the API involve syncing a dictionary of shared data between the phone & watch; it also makes data storage on the watch more convenient. The downside is that this requires a specific key for each individual data element synced to the watch - i.e. specific numbered departures rather than a variable array of scheduled trains.

With that in mind, the keys were defined thus:

The main issue I ran into with AppSync was a storage limitation. The sample code includes a 30 byte sync buffer which is insufficient for most data sync requirements, but it wasn’t immediately obvious that’s what the error DICT_NOT_ENOUGH_STORAGE was referring to. Upping the buffer to 128 bytes solved the issue. That should be enough for anybody.

Once the data was synced, I update the UI using the following function:

...where dest_text_layers and time_text_layers are four element arrays containing references to the text layers on the watch UI.

Can you spot the bug? If you haven’t done much work with embedded systems it’s not obvious. Critically, the documentation for text_layer_set_text says:

The string is not copied, so its buffer most likely cannot be stack allocated, but is recommended to be a buffer that is long-lived, at least as long as the TextLayer is part of a visible Layer hierarchy.

time_str is not copied when passed to text_layer_set_text; the effect being that it goes out of scope and is never displayed on the watch face. The solution is a set of string buffers referenced statically - I used a static char pointer array, and malloced/freed the buffers in window_load/window_unload.

Pebble integration doesn’t require a a substantial amount of code - drag in the frameworks and pull a PBWatch reference from PBPebbleCentral.defaultCentral().lastConnectedWatch(). Because I want to be able to show the number of minutes until a train leaves, I changed the earlier code from a HH:MM string to a ZonedDate/NSDate in the Haskell & Swift code. I then implemented Pebble communication using the following (dest/pattern is abbreviated to economise on transfer bandwidth & Pebble display size):

There was a problem though: the Pebble showed around -470 minutes for each train (i.e. 8 hours out - suspicious, as local time is +8:00). Turns out Pebble has no concept of timezone at all. The docs spin this as: “Note that the epoch is adjusted for Timezones and Daylight Savings.” Not sure that qualifies as epoch time, but it was clear the conversion is meant to happen on the phone. The following code sorted the issue:

The result (I have a promising future as a watch model). I’ll give it a good workout near the train station over the next week. 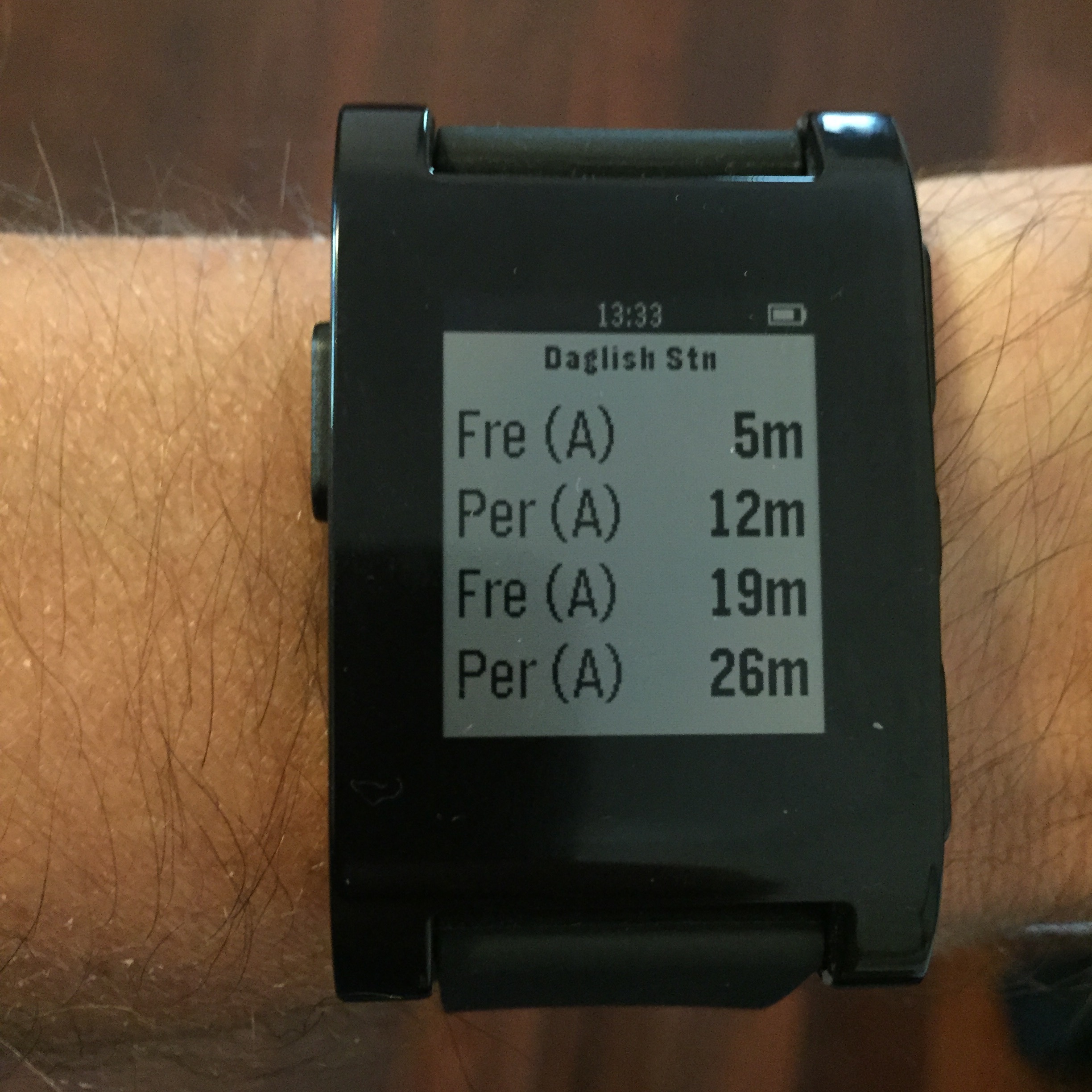 As always, the code is available here, here and here.

A last note: The fact that I’m on week 5 of my watch app development journey and am yet to touch WatchKit is not lost on me. I should hopefully start hitting WatchKit code this week. With a bit of luck.