Following the yanking of Flappy Bird from the App Store (and the subsequent proliferation of indie apps), a colleague said: “We should build an app called ‘Flappy Word’, where instead of flying through pipes, you collect letters and make words”. This sounded like an absolute winner of an idea, so I went home and coded up the basic game in SpriteKit that evening. We spent the next week and a bit refining gameplay, designing artwork,  gathering feedback from users, changing the name to something that doesn’t ‘leverage a popular app’, and submitted it to the App Store.

I have to confess to not being much of a gamer (and I haven’t built a game before), so I’m not well equipped to assess whether the game is any good, or predict how many will download it. However, the process of building it was certainly enjoyable, and as I learnt a lot doing it, I’ll go through some of the key design decisions here.

I haven’t done much work with game engines, but for a game newbie, SpriteKit is a very well-designed framework (if you’re okay with iOS 7+ only). Its allegedly heavily inspired by the popular Cocos2D, but beyond that, it’s a first class Apple framework with expected levels of integration and consistency with the rest of UIKit & CoreFoundation. I’d picked up a copy of Dmitry Volevodz’ ‘iOS 7 Game Development’, which uses an endless runner game as an example, and was able to use this to ramp up on the framework pretty quickly.

SpriteKit has a relatively simple and understandable model, which revolves around SKScenes, SKNodes and SKActions. On an 8-bit style game it required liberal use of node.texture.filteringMode = SKTextureFilteringNearest to prevent antialiasing when scaling up low-res artwork.

Some of the other tips/techniques I discovered were:

The interesting problems that needed to be solved here were:

Item 2 requires a word list. As a writer of a non-US flavour of English it was important to me that there be a choice of wordlists (thanks to 12dicts). Despite the Apple documentation and some older references to the contrary, there is definitely a British English language preference in iOS, so it was relatively transparent to load the correct list according the the user’s language settings. The word lists required some pre-processing in a simple ruby script to remove words with punctuation and words shorter than 3 characters. Potentially, I could also strip out words that had a valid word as a prefix (e.g. ‘doggerel’ is unplayable as it’s prefixed with ‘dog’), but I’ve kept them in the list for the moment for potential game enhancements.

The word lists contain up to 75,000 words, which is workable as in-memory data, but should really use an efficient lookup mechanism rather than scanning the entire array each time a letter is hit. Because I know the lists are sorted, I can use a binary search - Cocoa provides one with the -indexOfObject:inSortedRange:options:usingComparator: method of NSArray, which I implemented with a prefix check in the comparator. Each collision, the game can quickly check whether the current letter combination is a valid word, is the start of a valid word, or is invalid.

For item 1, letters are spawned randomly using a very simple frequency weighting (i.e. vowels are more likely). Further localisation of the app would need the frequencies adjusted (and accented letters included, depending on language).  However, during play we noticed it got tedious waiting for a random spawn of the one letter you need, so I included a probabilistic component that includes valid next letters more frequently. This results in the game hinting fairly explicitly in some instances (i.e. if there’s only one valid letter).

It’s probably obvious neither of us are designers! We wanted to go for a retro style, both to make it more Flappy Bird-esque, and because we’re both ancient enough to have played C64/Amiga/classic Mac era games. It has an Australian bush theme, just for something different (see if you can spot the Western Grey Kangaroo).

As an example to try to illustrate the workflow, the bird sprite went through the following evolution:

S: “I slightly modified the Flappy Bird sprite to make it look more like a magpie lark”

H: “Larger Bird Nerd sprite. I liked what you did with the glasses thing and have tried to enhance that further.”

S: “I think his eye still needs to be bigger. Should he have more white on his belly?

S: “Couldn’t help myself - I had to make his glasses bigger”

The coins were added late in development, after the sound effects were added, as they were quite reminiscent of the Mario-style coin collection and solved an issue with legibility and contrast in drawing the letters directly onto the background. 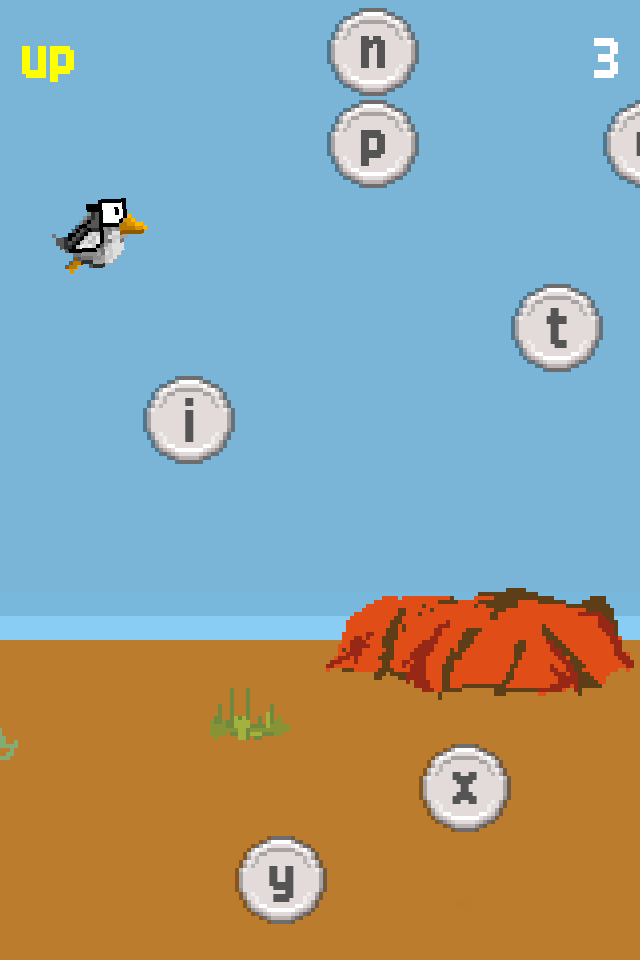 The basic mechanics are close to that of Flappy Bird - tap to fly up. Flappy Bird appears to instantaneously set the upward velocity to a constant value rather than apply a set amount of force, i.e. it’s irrelevant how fast you were falling before the tap. I did wind back the gravity and upward velocity to make the game a bit more controllable - the early versions were incredibly difficult, and given the spelling component of the game is quite hard, it was a reasonable trade-off to make flying a little easier.

Initially we noticed players lurked at the top or bottom of the screen to wait for letters - we solved this by ‘landing’ and pausing the game if the bird got too low, and spawning letters all the way up to the top of screen (behind the score) to prevent staying high. Initially the letters were completely random with some hit-testing to prevent overlap, but once we went to letter coins it made more visual sense to lay them out on a grid.

The actual physics and collision code was remarkably simple thanks to SpriteKit; the only real issue I came across was a little bit of ‘drift’ in the player’s x position, presumably due to collisions (easily rectified by resetting in the SKScene -update). I shudder to think how much effort it would have been writing something like this in 6502 assembler on a C64.

I went for iAd in-app advertising as a revenue model - even if I felt it was worth it, charging upfront for a game in such a crowded market is a really hard sell. In-App Purchase is where nearly all of the game revenue is, but it’s a fair bit of additional development work, and is generating wariness in some consumers thanks to an increasing number of slimy implementations. iAd isn’t regarded as a high earner, but I wanted to experiment with it (partly so I could have some stats for the next Perth iOS Meetup). Plus, I just can’t stand non-retina ads. And yes, I’m aware of the irony of complaining about pixelated ads in an intentionally pixelated game!

iAd implementation is quick & easy - the contract can be configured in about 10 minutes online, and integrating a banner view is only a couple of lines of code. There are a few gotchas - most of the Apple iAd documentation still refers to deprecated methods, and there are a handful of rejection-tempting faux pas you need to be aware of, such as displaying a blank banner view, or submitting screenshots showing test ads.

Working with someone else on an app was quite valuable, both in the sense of ‘two heads are better than one’, and to keep the motivation and development pace up. At this stage I have no idea how the app will be received, or how to go about marketing it, but I’ll add another post once the dust has settled and I’ve got some download and iAd stats. In the meantime, get your Bird Nerd on and post your score on Twitter!